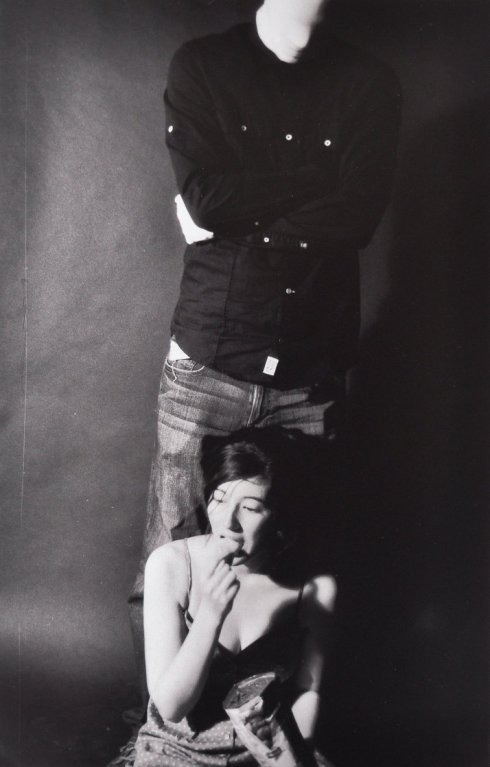 By way of explaination, At twenty-one years old, Sarah “Sapphene” Soltan currently studies game design at the Savannah College of Art and Design. She has always loved the fine arts for their ability to visualize difficult topics and emotions, but her dreams at the moment reside in creating art for video games that engage the player in the same way one might view a fine art piece.

Before attending SCAD, Sarah photographed “Shame” as part of a series to create more dialogue and understanding about eating disorders.

Next, you may have noticed that there were no prose authors mentioned. This is not by design! Unfortunately, none of the 100+ stories we received were right for us, but we did find a whole lot of great poems, so fuck it, I went with it. This, however, means there was no winner for the fiction category of our contest, meaning that the poetry winner doubled their money into $40.

And that winner is Anna Weaver, for her poem “avocado (for Jocelyn)!

Congrats to her! Congrats to everyone! Buy, buy, buy (here, at this link or from the Buy tab above)!

Here’s Terry Allen, author of “We Sat on the Fantail and Talked Quietly,” giving some really thoughtful and useful answers to my questions.

Describe your writing in 25 words or less.

I like to tell stories, hopefully with a sense of empathy and humor.

Tell us about your poem “We Stood on the Fantail and Talked Quietly.”

During the summer of 1967, before my senior year in college, I worked on Lake Michigan where I spent three months crossing between Muskegon, Michigan and Milwaukee, Wisconsin with only three half-days off the ship.  At the time, I just knew that if a pterodactyl flew over my hometown of Kansas City, that I’d be the last to know.

Who or what inspires you to write?

I’m most influenced by film and have been my entire life, even when writing or directing stage plays or most recently turning to poetry.

Who are some of your favorite authors?

Charles Dickens, Lewis Carroll and Mark Twain would be high on my list, as well as modern noirish writers like James Lee Burke and Stuart Neville.  Screenwriters would include Billy Wilder, Preston Sturges, John Huston, Ingmar Bergman and Woody Allen.  For poetry, there are none better than Ron Koertge and Louis Jenkins.

What are you working on right now?

I’m working on a piece about a Civil War reenactor whose specialty is dying on the battlefield.  He likes getting killed early and spending plenty of time bloating, which in my poem turns his mind to thoughts about Ambrose Bierce.

Where can we read your work next?

I have a poem appearing in I-70 Review later this month.  It’s one of my personal favorites: “You Can’t Change the Past.”

Do you have any advice for fellow writers?

Experiment with point of view.  I never automatically believe that the narrator in a piece of prose fiction or the persona in a poem is the writer.  It’s fun and often rewarding to pick someone who is very far removed from ourselves to tell the story.

Don’t be surprised that what goes in is what comes out.  What we listen to, what we see, what we read, what we experience will come out when we sit down to write.  So, why not make those experience varied and rich.

If you didn’t already read all over the rest of the site, we’re currently closed to submissions until November 1. Thank you to everyone who sent me their work. I enjoyed reading all of it, sincerely or ironically.

But! We still have Issue 12 business for the next few weeks. Here’s Rachna, who gave us both a poem and a story for Issue 12.

Describe your writing in 25 words or less.

Emotional.
Tell us about your story “hair.”
When I was 11-12 years old, I had to shave my head.  Since then, I’ve always wanted to write about it: the significance of hair in a girl’s life. The story originated from a personal experience and took a shape of its own.


And then there’s your poem “The Hispanic at the 7-11.”
Oh yes, another one that started with an image I saw not too long ago before I wrote the poem. It took me several weeks to write. I kept on going back and forth trying to make it as perfect as I could.
Who or what inspires you to write?
Experiences of my life. A lot of reading and day dreaming.
Who are some of your favorite authors?
Gabriel Garcia Marquez and all the authors whose stories have been published in the the Best American Short Stories series .
What are you working on right now?
A couple of flash pieces and a poem.
Where can we read your work next?
Isthmus, Limestone Journal, Avalon Literary Review, Carbon Culture, Chiron Review.
Do you have any advice for fellow writers?
Write, edit, submit. If rejected, keep editing, keep submitting. Don’t give up.